Menu
This half term we are thinking about forgiveness in collective worship.
Log in
C Search
D Translate
B Log in Login

This week in Mathematics the children have been introduced to addition. We introduced solving addition problems using the language first, then, now. The children started the week working out some problems about people on the bus. Miss Carville created a bus in the classroom and invited children on board and they found this very exciting.

This week in English we have been writing a Dairy from Drip's point of view. Before we started writing, the children thought carefully about what drip might have been feeling when she was left out by the other T-Rex Dinosaurs. They created a freeze frame and talked through the thoughts of the characters. This was a very enjoyable lesson and the children shared some excellent thoughts.

This week in Mathematics we focused on recognising coins and then started using 1p coins to share a given amount into two groups on a bar model.

This week in English we discovered a mystery egg on the playground so we are keeping it safe in our classroom. We then wrote our questions we had about the egg. The children also did some acting out of parts of the story Tyrannosaurus Drip. We focused on how drip was feeling and thinking.

We have spent this week talking about Harvest and thinking about how we can give to those less fortunate than us, not just at Harvest time but all year round. The children chose to sing the harvest song 'Big Red Combine Harvester'. They really enjoyed the actions.

This week in Maths we learned about how to partition 5 into two parts and practised recording this in a bar model and part whole model. The children showed great progress over the week.

This week in English we have been doing some descriptive writing about Dinosaurs with a focus on using capital letters, full stops and orally rehearsing our sentences before writing them.

This week in Science we went on a hunt for mini beasts in our butterfly garden. The children really enjoyed hunting for the mini beasts and then we made predictions about what they might eat.

This week in Maths we have been finding one more and one less than a given number to 20.

This week we used the track pad on the laptops to click and drag the cursor to create a picture in a paint app. The children really enjoyed this and some children drew flowers and bees etc. Can your child tell you what they drew?

We are so happy to all be back together in school and the new Turtle class have been delighted to see their friends again. Miss Carville, Mrs Grant, and Mrs Hext are very proud of the turtles with how well they have settled into our new routines and the effort they have given to their work.

This week in Mathematics we have been ordering and comparing numbers up to 20 as well as practising counting forwards and backwards with numbers to 50. We were able to create our own number lines and then by the end of the week we could identify given digits to 20 and order them from smallest to greatest. Please see some pictures below of the children hard at work creating their own number lines.

In Geography this week we really enjoyed identifying Catherington village on Google earth, we could zoom in and see our school. The children really enjoyed looking at some of the key features of Catherington village and comparing them to features of a Town or City. We then discussed the difference between a human and physical feature before the children had a go at sorting some pictures into those that were human features and those that were physical. I was very impressed at how the children could explain to me their reasoning.

In music we listened to a classroom sounds audio and identified different sound sources and materials. We analysed the duration and dynamics of sounds around the school. We then used objects from around our classroom to create sound patterns and recorded them to make our own classroom sounds audio. Mrs Mannie was our conductor and did a superb job, Thank you Mrs Mannie! 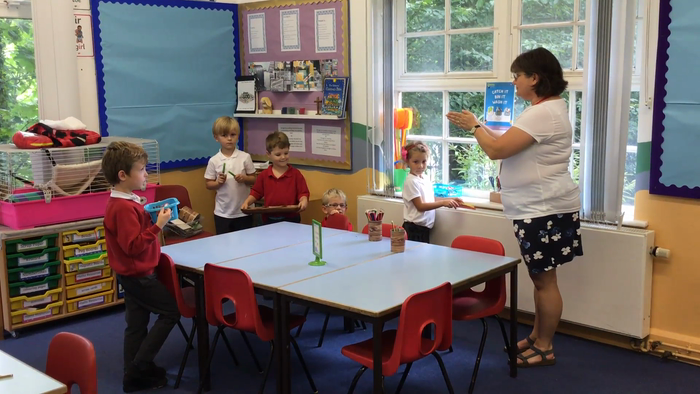 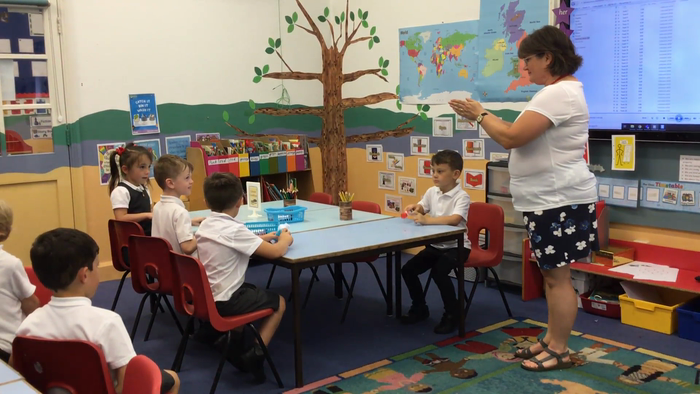 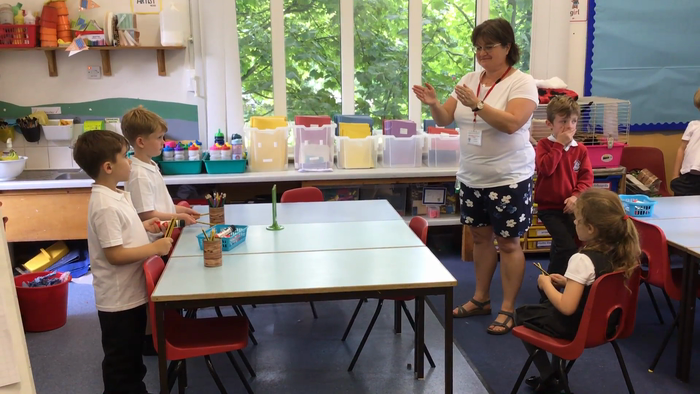 I just wanted to take this opportunity to mention that your children will be able to change their reading book on a Monday and a Thursday!